We know many people think collars are a good idea for cats, but cats are not like dogs.  There are more dangers for a cat either getting themselves caught up in something, or getting body parts pinched in the collar.  Sometimes they are fine and nothing happens.  We cannot stress enough how many times we see things like the image below.  This cat was lucky, but many are not.  Collars can lead to serious bodily injury, amputation, or strangulation.  Even saftey clip collars can fail to release.  On kittens, if not resized, they can litterally choke the kitten to death as it grows. Flea collars contain chemicals that keep everything by a cats head and nose, where they can have toxic effects. 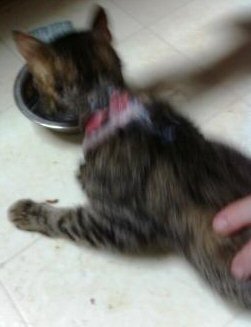 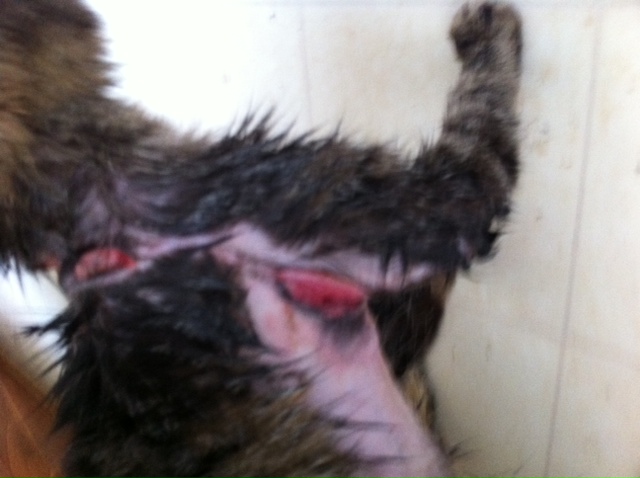 Personal stories from a foster and one of our volunteers:

***I didn't get a picture of Collier's wounds from his collar damage. In total, it cost more than $1800 to get him fixed up and available for adoption.

Collier was a friendly cat; we figured out later he was hiding because he was scared to be on the street, and in extreme pain – someone put a loose plastic collar around his neck, and his right front leg was through it, past the elbow and stuck at the armpit. His hopping gait rubbed the skin raw and the skin was split wide open.

We cut the collar off - the wound was infected, and the collar had done severe damage, cutting skin and nerves down into the muscle. The opening of the wound was 5 inches by 4 inches, in his armpit!  The vet was astonded by the size of the wound.  Collier was treated with antibiotics only, because the wound was too large to be stitched at that time.
We also took him to a chiropractic vet, because his back and neck were so sensitive to touch. We are sure his back was sore from his arm being caught this way for who knows how long.
The wound healed enough to be stitched, but the stitches broke apart twice. Something else was going on in the wound, otherwise it would not have broken open. A biopsy confirmed a very bad bacteria was preventing the healing (this bacteria is called pseudomonas). The tissue was cultured and the antibiotic prescribed was very expensive (Ciprofloxacin - over $100).  ~Mona

***Toby, a cat my daughter fostered came with a collar on him. I was worried since he'd been on the street he'd try to get out, so while I had never before used a collar on a cat, we left it on.  Later that week, he used his collar rabies tag as leverage while we weren't home, to get it off.  He sheared all the fur off his neck and ears, and thankfully didn't choke himself to death.  We were still worried about him getting out, so my daughter got him a saftey clip collar and left the tag off.  He managed to get that off too, and then chewed up the saftey clip, which was made of plastic.  Luckily he must not have swallowed any of the clip, which could have caused  a whole different set of problems.  There were no more collars after that.  It took a long time for all the fur to grow back, and we learned to never use collars again.  ~Bettina