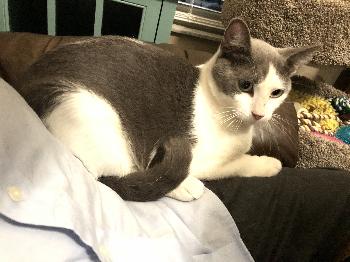 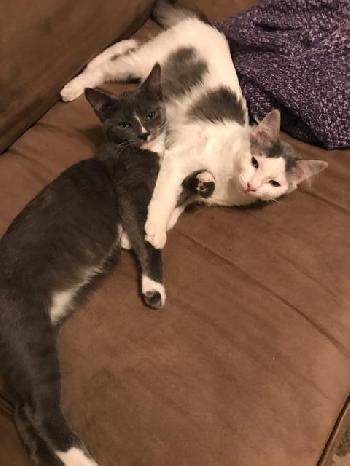 We adopted Jasmine and Jayden in June 2017 to join our family. We already had two cats so we were a little nervous as to how they would react to the new babies, but they have warmed up to them. They are obsessed with my cat Lelo, she gives them baths and they love it! They are the cutest little cuddle bugs ever! I think they love their new home as well. They have tons of toys and plenty of room to wrestle and run around! Jayden is a mommy's boy for sure! Hes a talkative little peanut, but also loves to start wrestling matches with his sister. Jasmine loves to jump and catch her toys from the air, she also seems to be the bravest of the two. I cant wait to see how their personalities develop in the next few months. We love the little balls of energy. They sure do provide us with entertainment! ~Courtney & Nicholas

"...we thank you so much for allowing us to take this beautiful girl into our lives. She blossoms more each day. She talks all the time. All she wants is to be picked up and loved and kissed. I think we are creating a monster...Ha ha.

She still spends most of her time in our bedroom, but now the door is open and she may come and go as she pleases. The 'boys' are in awe. They aren't sure just why she is here, but there have been no cat fights....only a few growls and hisses. These will subside.

She has been sleeping with us since the first night she was here. We love her. I still cannot image who would put her in a kill shelter. She is wonderful. We are so thankful.."

Backstory: Jovanna was adopted from us in 2003 as a 6-month-old kitten. She was born deaf, and we had pulled her from the kill list at the county shelter.

After 11 years, she was again left at the county shelter. We don't know why the owner did not call us, because we do take them back. Luckily a volunteer at the shelter saw the PAWS logo on the paperwork which was turned in with Jovanna. (BCSO did not contact us - the volunteer did). So, once again, we pulled Jovanna from the county shelter.

We called the owner to find out Jovanna's likes and dislikes. The owner hung up the phone on us and would not discuss it.

Jovanna quickly acclimated to Mona's garage foster area - she carved out her "spot" and would swat at any other kitty who came near! With sometimes a dozen cats free-roaming the area, Jovanna made sure "her" space was secure. Mona set her up with her own food and water nearby, plus two litter pans to choose from.

We were sure a lot of people would like her "look" -- yes, she is one of those "flashy" white cats, with one green eye and one blue eye! However, once they would find out her age and that she is deaf, they would not consider her for adoption. :(

And yes, that is exactly what happened, over and over, for the next year and 3 months. We had about 20 inquiries about her. One family even came over to adopt her in early 2016, and then backed out.

In early July 2016, when another family came to meet her in the foster area, Jovanna responded to them right away....and it's a match made in heaven!!! 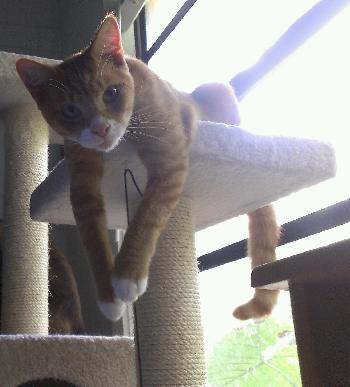 He's doing great! Him and the other boys started getting along way faster then we thought they would! And even better, Remington bonded with him almost instantly! They're little furry best friends and wanna do everything together! It's so cute! I keep trying to get a picture of them together to send to you, but they move every time lol. I can't get over how snuggly he is, and he just figured out last night that if he hides under the end of our comforter , he can attach our feet as we walk by! He gets so excited when he does it! I did manage to snap a picture of him on the kitty tower, which is quickly becoming one of HIS favorite spots :)
Next Page »
Click a letter to find an animal or view all.
A | B | C | D | E | F | G | H | I | J | K | L | M | N | O | P | Q | R | S | T | U | V | W | X | Y | Z